As this news hit in the last throes of 2017, it seems appropriate to take a step back and understand why exactly marijuana was banned all of those years ago. Please continue reading to find the answers on this long and weird journey through time. 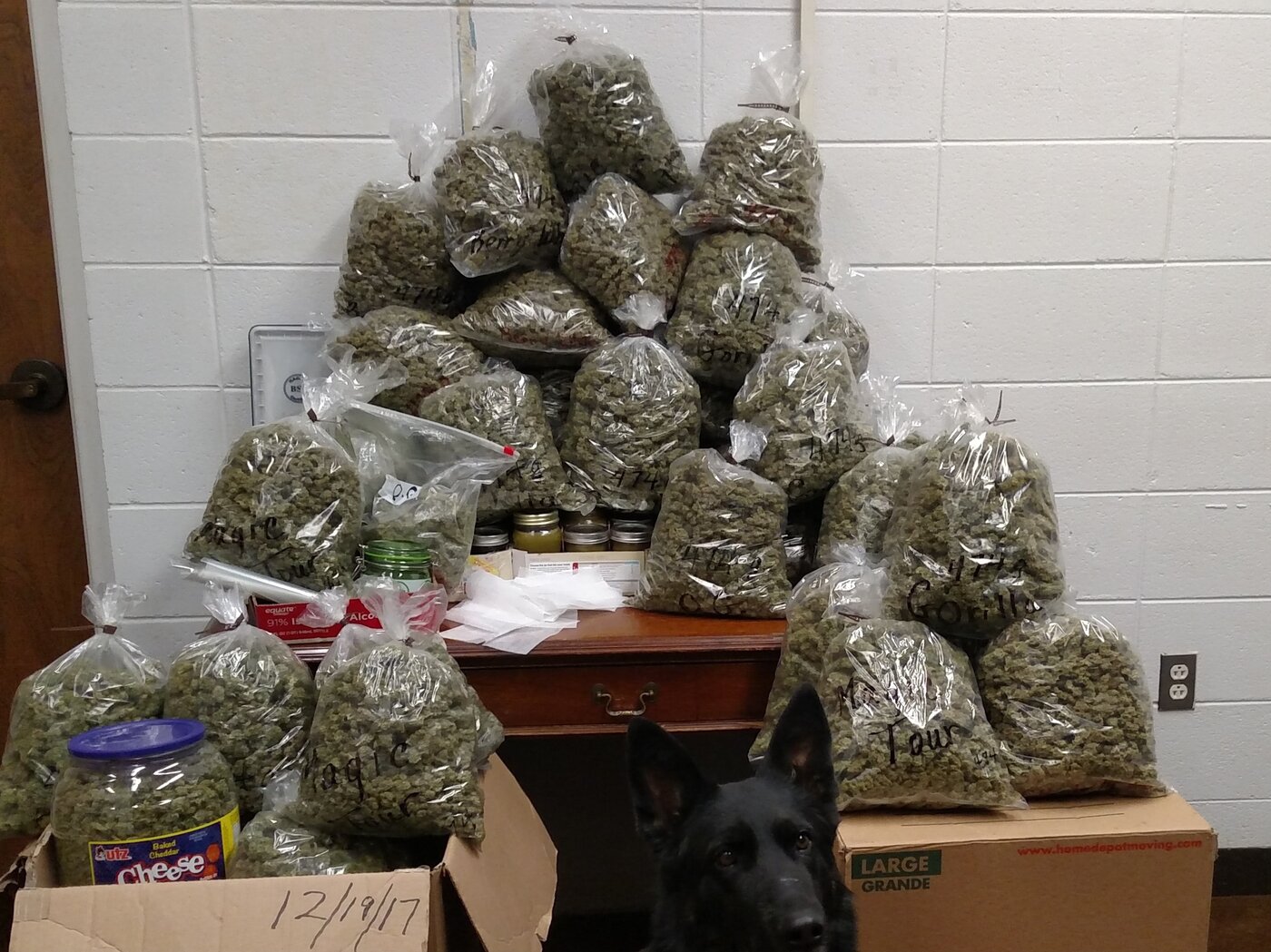 Sheriff’s deputies in York County, Neb., arrested an elderly California couple who had approximately 60 pounds of marijuana in their vehicle.

Sheriff’s deputies in York County, Neb., stopped a pickup truck on Tuesday when they noticed it driving over the center line and the driver failing to signal.

During the traffic stop, deputies noticed a strong smell of raw marijuana, the sheriff’s department says.

Patrick Jiron, 80, and Barbara Jiron, 73, said they were from northern California and were en route to Boston and Vermont. 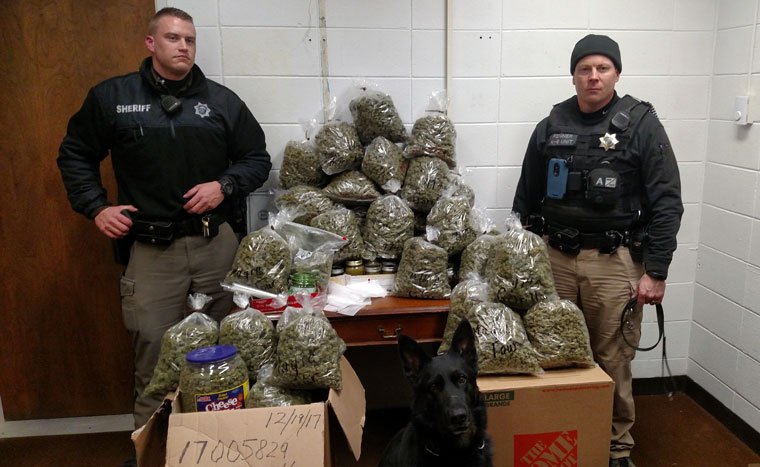 Deputies asked the driver, Patrick Jiron, about the odor, and he admitted to having contraband in the truck and consented to a search of the vehicle.

With the help of the county’s canine unit, deputies searched the Toyota Tacoma. When they looked under the pickup topper, deputies found 60 pounds of marijuana, as well as multiple containers of concentrated THC.

“They said the marijuana was for Christmas presents,” Lt. Paul Vrbka told the York News-Times. The department estimated the street value of the pot at over $300,000.

The Jirons now face felony charges of possession of marijuana with the intent to deliver and no drug tax stamp. (Nebraska law requires marijuana dealers to purchase drug tax stamp from its Department of Revenue as evidence that the state’s drug tax has been paid.)

For the friends and family in New England who expected a bag of weed in their stocking this year, it looks like it won’t be a green Christmas, after all.

Marijuana (also known as cannabis sativa or cannabis indica or hemp) has been a medicine for thousands of years. Marijuana is found in all recorded history, on every continent as a medicinal crop. Egypt to China to India to Assyria (Iraq) and Arabia. From the Greeks and Romans to present day. In the early USA, hemp was an integral part of life. George Washington grew hemp and many colonists grew hemp for cordage and canvas, including ropes and sails for ships.  Newspapers in 1841 went into great detail on how to cultivate hemp, including separating the male plants from the female plants.

Many papers also reported stories about having a laugh while smoking hemp, as is the case with this 1850 report from a Paris correspondent for the Medical Times. There are many examples in American newspapers including poems, insults, references and propaganda  on the subject of hasheesh (the old timey spelling of hashish), marijuana, cannabis and hemp. Just look at this article from 1908, they found marihuana in this man’s pocket!

It is believed the man had been smoking the deadly drug and became crazed from its effects.

1906 – The Pure Food and Drugs Act Requires Labeling of ingredients of Medicine, Including Cannabis.

Previous to the Pure Food and Drugs Act, many medicines were treated the way Coca-Cola is today. “A secret formula” or “A proprietary blend” of spices and medicines and even poisons including arsenic and strychnine. Writing cannabis on a label did not ban cannabis related medications.

Many major pharmaceutical companies which are still around today, used to sell cannabis based medicines. Pharmacists used to make cannabis based compounds and elixirs and extracts and pills as well.

Newspapers had been printing a lot of yellow journalism on the subject of marijuana over a number of years.  Articles were passed around from newspaper to newspaper, with editors changing and inserting local opinion into the reprinted stories.

These are only a handful of articles, more comprehensive research must be done.

The Mexican Revolution in 1910 caused many Mexicans to move to the USA. Racism and xenophobia increased in the bordering states. Residents and leaders wanted any and all excuses to jail and deport Mexicans. According to various timelines of the history of marijuana, the first anti-marijuana laws started in individual southern states bordering Mexico.

Racism was used against marijuana during international treaties and drug control laws as well.

Historians cannot find the reason why Canada banned cannabis in the 1920s, except for racism against the Chinese.

One reason that no one in Parliament asked about or challenged the addition of marijuana to the schedule may be because little was known about the drug in Canada at the time, and very few people were smoking it.

We could find no references to marijuana in either the Toronto Star or the Globe and Mail in 1923. And there were no police seizures of marijuana until 1932.

Looking back, it may seem odd that a decision that has in one way or another seriously affected the lives of hundreds of thousands of Canadians took place without debate.

Searching for the scientific origins of Canada’s marijuana prohibition is a quick exercise. There was no science used to justify the laws instituted 90 years ago, just a mess of panic, racism and accident that has metastasized over time.

Emily Murphy, the famous Canadian suffragette, was partly responsible for spreading panic across the rest of Canada. In a series for Maclean’s, Murphy wrote of the “grave drug menace” facing society, personified by illustrations of a caricaturized Asian man.

“It behooves the people in Canada and the United States, to consider the desirability of these visitors — for they are visitors — and to say whether or not we shall be ‘at home’ to them for the future,” she wrote in her subsequent book The Black Candle. “A visitor may be polite, patient, persevering, as above delineated, but if he carried poisoned lollypops in his pocket and feeds them to our children, it might seem wise to put him out.”

Members of Parliament were chastened. In 1922 and 1923, minimum drug-offence penalties were instituted, maximum penalties were raised, and — crucially — foreigners found to have trafficked drugs could now be deported.

Carstairs counts 671 Chinese-Canadians expelled under the act over the next decade; their average time in Canada beforehand had been 17 years. Possession and trafficking laws were also applied far more severely to Asians than white Canadians. Not coincidentally, 1923 was also the year that the Chinese Immigration Act was implemented, capping immigration from China at just a handful of students and merchants annually.

Along with those changes, MPs rolled in another that garnered little attention at the time. They added a new drug to the list of prohibited substances: marijuana.

Scholars have long puzzled over this. Cannabis was not commonly used, and the average citizen might never have heard of it. In Murphy’s 400-page The Black Candle, marijuana was covered off in seven pages (though hysterically). It would not be prohibited federally in the U.S. until 1937. Even in 1975, a deputy minister in the Health and Welfare department called the reasons for banning marijuana “somewhat obscure.”

Whatever the motivation, marijuana was banned without debate. The only recorded statement in the House of Commons was: “There is a new drug on the schedule.”

The drug panic of the 1920s quickly faded away. Annual convictions for marijuana over the next 20 years hovered between zero and 12. There wasn’t a single police seizure of the drug until 1937.

Cannabis prohibition was based on and helped by alcohol prohibition. Alcohol prohibition, largely thought of as targeting alcohol itself, was chiefly about prohibiting saloons. The Saloons of the 1800s and 1900s also hosted gambling, dancing with women, vaudeville, musical shows and frequently employed saloon girls to entice and encourage alcohol consumption. “The Saloon Must Go” was the Anti Saloon League’s motto.

Honky-tonks in the Old West were a mixture of bawdy music hall, casino, saloon, cheap dance hall and brothel, frequently linked to lawlessness and violence.

Music, dancing, girls and musicians? Sounds very similar to the REEFER MADNESS propaganda against Jazz Clubs in the 1930s. From the Senate Hearing on Juvenile Delinquency and Marijuana Decriminalization, including  4 years of research during 1971-1975, no clues were found to explain why marijuana was banned.

Despite the increasing public interest in the narcotics problem during this period, we can find no evidence of public concern for, or understanding of, marijuana, even in those states that banned it along with the opiates and cocaine. Observers in the middle and late 1930’s agreed that marijuana was at that time a very new phenomenon on the national scene. The perplexing question remains-why did some states include marijuana in their prohibitive legislation a decade before it achieved any notice whatsoever from the general public and the overwhelming majority of legislators?

From a survey of contemporary newspaper and periodical commentary we have concluded that there were three major influences. The most prominent was racial prejudice. During this period, marijuana legislation was generally a regional phenomenon present in the southern and western states. Use of the drug was primarily limited to Mexican-Americans who were immigrating in increased numbers to those states. These movements were well noted in the press accounts of passage of marijuana legislation. A second factor was the assumption that marijuana, which was presumed to be an addictive drug, would be utilized as a substitute for narcotics and alcohol then prohibited by national policy. This factor was particularly significant in the New York law, the forerunner of nationwide anti-marijuana legislation. Finally, there is some evidence that coverage of the drug by the Geneva Conventions in 1925 was publicized in this country and may have had some influence.

Why was marijuana banned?

Racism against blacks, Mexicans and “undesirables”

Harry J Anslinger was a racist and a liar.

Senator Davis: How many cigarettes would you have to smoke before you got this vicious mental attitude toward your neighbor?

Mr. Anslinger: I believe in some cases one cigarette might develop a homicidal mania, probably kill his brother ….

Marijuana continues to be banned because:

In 38 states and the District of Columbia, the racial disparities in marijuana possession arrests increased between 2001 and 2010. See Table 7. The jurisdictions with the greatest percentage increases in racial disparities in marijuana possession arrest rates over the past 10 years were Alaska (384%), Minnesota (231%), Wisconsin (153%), Michigan (149%), and Kentucky (146%).

Competition from the Alcohol industry

Uninformed do-gooders like MADD, who have not seen the statistics of lower alcohol driving deaths in states that have legalized marijuana.