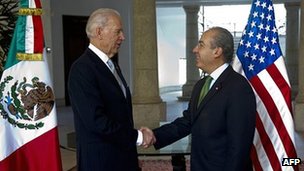 The US remains firmly opposed to the legalisation of illicit drugs, Vice-President Joe Biden has said during a trip to Mexico.

Mr Biden, who is also visiting Honduras, said such a debate was "legitimate" amid rising drug violence but US policy would not change.

Some regional leaders have called for a discussion on decriminalising drugs.

He was then travelling on to Honduras for talks with President Porfirio Lobo and fellow leaders from El Salvador, Panama, Costa Rica and Guatemala.

Last week, the Organization of American States (OAS) warned that drug gangs were posing a growing threat to democracy in Latin America.

Guatemalan President Otto Perez Molina, a retired army general, has ordered his nation's army to join the fight against the trafficking gangs but also called for the possible decriminalisation of drugs.

"It's totally legitimate for this to be raised, and the reason it warrants a discussion is, that on examination, you realise that there are more problems with legalisation than non-legalisation," Mr Biden told reporters in Mexico City.

During their talks, President Calderon pressed Mr Biden for the US to do more to to stop the flow of weapons and drug money over the border.

They are Josefina Vazquez Mota of the governing National Action Party (PAN), and opposition candidates Enrique Pena Nieto of the Institutional Revolutionary Party (PRI) and Andres Manuel Lopez Obrador of the Party of the Democratic Revolution (PRD).

The drugs issue is likely to surface next month when regional heads of state, including President Barack Obama, gather in Colombia for the sixth summit of the Americas.