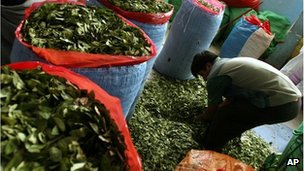 Lawmakers in Colombia have proposed decriminalising the cultivation of the coca leaf and marijuana to deprive traffickers of revenue.

The proponents say the law would reduce prices and give farmers more incentive to grow other crops.

The bill will be debated by the lower house of Congress in the coming days.

But Colombia's justice minister has said introducing such a law would violate Colombia's commitments to international narcotics treaties.

Colombia is one of several South and Central American countries facing widespread drugs-related violence, with much of the product destined for users in the US.

The measure was proposed by Liberal Party Congressman Hugo Velasquez and signed by seven other lawmakers.

It would eliminate prison terms for growing coca leaf, the main ingredient for cocaine.

"We have to tell the United States and other consumers, Colombia has already paid enough, mostly in blood", said Mr Velasquez, who represents the coca-growing province of Meta.

"It hasn't worked. It's time to change the strategy."

The proponents say the law would lead to the market being flooded with cocaine, lowering its price and reducing the incentive for farmers to grow coca for cartels and rebel groups.

"Let's see how well the laws of the market work," Mr Velasquez said. "If there's excessive production due to the lack of criminal penalties surely the market will depress the price."

The government in Bogota has signalled its opposition to the law.

"We have to be particularly prudent and careful," he told the Reuters news agency.

Correspondents say the bill is likely to fail, but is intended to focus the attention of leaders meeting next month in Colombia for the Summit of the Americas on how to combat illegal drug production.

The US has previously made clear its continued opposition to legalisation of drugs, while acknowledging it as a legitimate subject for debate.