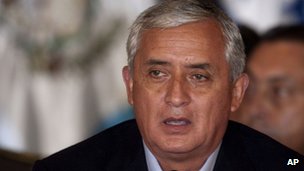 Guatemalan President Otto Perez Molina has said the war on drugs has failed, and it is time to end the "taboo" on discussing decriminalisation.

He was addressing a Central American summit in the Guatemalan city of Antigua.

Mr Perez Molina convoked the meeting to consider decriminalisation as a way of reducing drug-related violence.

But the presidents of Nicaragua, El Salvador and Honduras all cancelled their attendance at short notice.

Daniel Ortega of Nicaragua, Mauricio Funes of El Salvador and Porfirio Lobo of Honduras decided not to attend.

All three countries were represented by senior officials, and Mr Perez Molina was joined by President Laura Chinchilla of Costa Rica and Ricardo Martinelli of Panama.

"We have seen that the strategy that has been pursued in the fight against drug trafficking over the last 40 years has failed," he said.

"We have to look for new alternatives. We must end the myths, the taboos, and tell people you have to discuss it," he added.

Central America is a major transit route for South American cocaine heading north to the US.

The rising power of drugs gangs has fuelled corruption and soaring murder rates in the region, with Guatemala, Honduras and El Salvador particularly affected.

President Perez Molina caused widespread surprise when he announced in January that he thought it was time to consider decriminalising the consumption, production and trafficking of drugs.

But he has argued that the price Central America pays in human lives for the war on drugs is too high.

Mr Perez Molina is the first Latin American president to propose decriminalising drugs while in office, though several prominent former leaders have backed the idea.

The subject is also likely to be discussed at the Summit of the Americas in Colombia on 14-15 April.

The US has made clear its continued opposition to legalisation of drugs, while acknowledging it as a legitimate subject for debate.